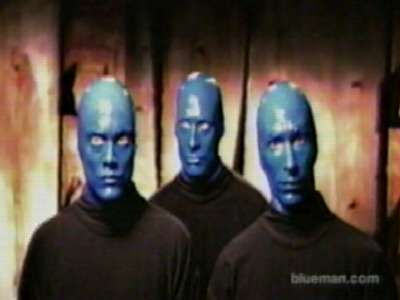 Before any performers take the stage at the Blue Man Group Theatre, there is a looming sense that this kind of show can go anywhere at anytime. Even the theater itself is shell of mystery waiting to come to life. After some mood lifting jokes grab the audiences’ attention, the pulse of the room is jolted with masterful live drums. The first real glimpse of the Blue Man Group in the spotlight brings the audience into their funky universe of light, humor and music. The front few rows might feel the drums raining in their laps as each hit triggers both a sound and a splash of bright colorful liquid. A theme of messy fun makes itself known here whenever possible.

The show is consistently funny, but there is a great wealth of entertainment in Blue Man’s grip of the unexpected. The Blue Men introduce their talent of weaving together rhythms of both music and comedy with lively finesse. It isn’t long into this show that the audience is bracing for the next act with equal parts laughter and exhilaration. 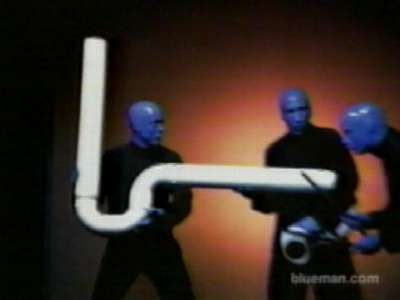 It is the music however that maintains a steady excitement. A live band with a large cast of extra thump is shortly revealed to be cascading over the full background of the Blue Man stage. Seeing them perform is visually wild but more interestingly they echo and enhance an already talented musical performance with great energy and movement.

Plastic pipes, Cap N’ Crunch, and gumballs find themselves becoming famous props in such inventive hands as well. The Blue Men make an art of adorning wonderful complexity though everyday items. The Blue Man Group performers find a myriad of ways to pull outlandish humor and circus like charm out of seemingly nothing. With instruments never seen before playing sounds the audience may never hear again, we’re shown that anything can become a musical toy. Although the songs aren’t familiar to a new audience, they are quick to invite everyone into an addicting groove. 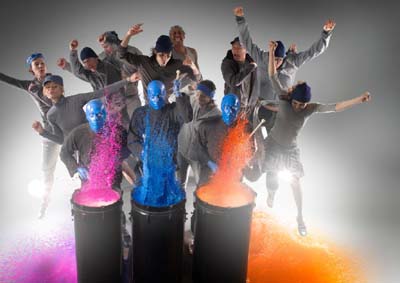 A select few may get pulled on stage for some personal live entertainment but everyone will get a chance to get up close. The Blue Men have no hesitation in storming the audience or climbing through balconies with mischievous intent. The show and the crowd break to interact at many points, some of the best and most hilarious moments are born of live wit and creativity.

As the show draws to the end, the pace quickens and the action is suddenly coming from all corners of the stage. Using simple animation and laser light, the eyes are tricked and teased into intriguing illusions. The show peaks at its conclusion with an act that literally wraps you up and will surely have you moving in your seat. After a long series of surprises the finale embraces as much music and madness as possible leaving the audience bludgeoned with positive beats. The sheer momentum of sound by the end may have the audience becoming Blue Men themselves. Many of them by then are standing, clapping, dancing, and making a musical mess out of themselves with no apologies. There is no mystery to why this show has made itself a staple of the Las Vegas experience.

This is a show with no rules but still breaks a few anyway.