Reviewed May 2006
by Nancy Hruska 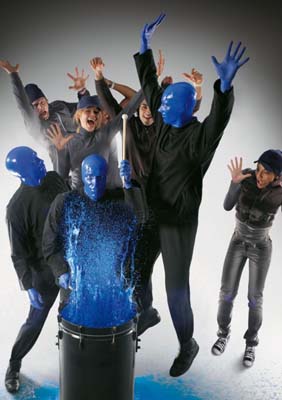 Why are the people in the front row wearing plastic covering over their clothes? Why is there an oversized DNA strand on stage? What are those brass figures in each corner of the showroom? These peculiar embellishments aren’t often found in top of the line Vegas entertainment so curiosity is peaked by even the most sedated audience members.

Far before the world renowned Blue Man Group show’s curtain slides, those waiting for God only knows what, share the same questioning cocked head…what in the world?…what on earth are they going to do with that? And this disorientation, this vacation from the norm, is exactly what the show celebrates: curiosity, experimentation, and the human condition. These three endearing blue men explore the world through witty comical and even thoughtful outbursts that can’t help but capture the hearts of everyone.

Expressionless, investigative, they reveal themselves and start the show with the obvious intention of getting themselves and audience members in trouble. Plastic covering in the front row is now recognized as imperative due to drum number where in which flying paint is as prevalent as the percussion itself. (Paint is a consistent and necessary ingredient in this outlandish recipe for visual and sensual fun).

Music, which is the true soul of the show, takes no time introducing itself. The band, stashed away in every corner of the stage high and low, dressed in fluorescent paint suits so the black light effect reveals something like video game skeleton musicians, explodes with powerful chords, monstrous percussion, and dramatic rifts. The sound is utterly deviant and shakes the core of everyone, no matter what.

The trio likes to experiment with their own musical expresssion though not through conventional composition. Rather, their exploits of sound include playing plumbing pipes, PVC indeed. Some of their original instruments include the “Tubulum,” a 4″ PVC pipe with rubber reeds on the end struck with drumsticks. Another, the “Drumulum,” is a drum with a sliding PVC pipe under it to adjust pitch. These among others get everyone moving as the blue men have an enviable knack for playing things that are normally attached to a toilet.

Art is certainly not an element to be left out of their weird formula for entertainment. One dared to work their genius by catching innumerable gumballs in their mouth then decorating a canvas in a way which paint brushes would be of no consequence and completely useless.

But ultimately, probably the favorite thing these blueberry epidermis triplets love to to do is mess with minds; in particular those malleable brains already confused and stuffed in a showroom. Whether they’re taking people on stage and shaking their world up a bit with twinkies and paint or going the more subliminal route so individuals are out their heads still in their seats, these blue soldiers have a method for it all. Poking fun is the underlying theme of it all. One demonstration of light hearted humility is a little number called howtobearockstar.com. The audience is taken through Dance 101 with horrible overly satirical dance moves and singing lessons in order to “fake it til’ you make it” and achieve pop star status. The victims: media and pop culture, but one ought not to take offense. After all, these hue challenged guys like to sit around and see how much stuff they can fit into their mouths.

A light show near the end of the production nearly caps off the journey through sensation. Stunning imagery and earth moving sound wrapped up neatly in a premise that makes fun of the fast and furious digital age leaves both senses and intellects truly stimulated. But one sense is still missing…touch. Without warning this is remedied as back to front of the audience comes a sea of paper. Rolls and rolls of paper. Endless to the point where no one knows which way is up. Why? What could this possibly represent? Nothing maybe, or perhaps it was just to bring smiles. Everyone smiles because now all the nonsense makes sense, even the odd brass statues. The DNA, beautiful on it’s own, but better with curiosity, wit, sound, joy and all the wonderfully weird things about being human certainly not to be forgotten.

Show Review: Donny and Marie - A Lifetime Of Showbiz Honed To Perfection
Peepshow - The Transformation From Nice To Naughty
Crazy Girls Keeps It Simple, Yet Sensual and Captivating