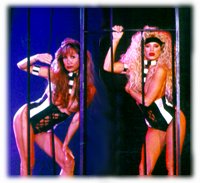 This is an hour of old style burlesque and raunchy comedy that doesn’t pretend to be anything else. The costumes and sets change as the dancers “sing” (the voices are taped) and dance to both modern hit songs as well as a couple of vintage “tongue-in-cheek” numbers. Except for the first set, they are topless throughout the entire show.

Carole Montgomery is the MC and also performs short comedy pieces during set and costume changes. Her style? Think of a female version of the shock comedian Andrew “Dice” Clay. The talk is all sex, and nothing is sacred. It was “revenge” of a sort, with many of the jokes having the women howling with laughter poking fun at men. 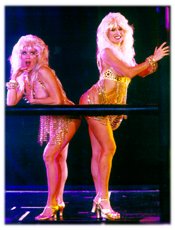 If you are coming to town, you promised your wife you wouldn’t go to a strip club (probably a good idea — those places are designed to part you with your money faster than the roulette table), and you and the guys are looking for something a little racy, this fits the bill. There were also a significant number of couples who seemed to be enjoying the show quite a bit. In an age of “child friendly” Las Vegas and production shows for all ages, this does put some of the sin back in “Sin City.”

La Cage Las Vegas - Believe It When You See It!
The Scintas Show Tickets and Reviews
Celine Dion - A New Day