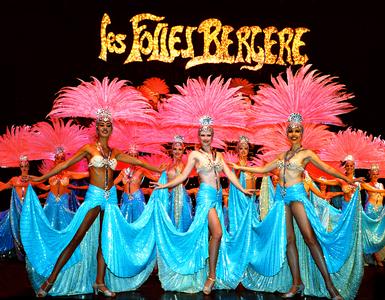 Raw. Provocative. Sexy. Alluring. Just a few words among many that can be used to describe Les Folies Bergere at the Tropicana. If you’re looking for a trip into Las Vegas past, this is it ? without the DeLorean.

When one thinks of old Vegas, they envision the big, bold shows with the tall and supple women and the huge, bright feathers that adorn them. The energy, the passion, and the colors all appease the senses as you’re engulfed into history. The transient experience makes it feel as if you can walk out of the theater and sit down with Dean, Frank, and Sammy for a drink. 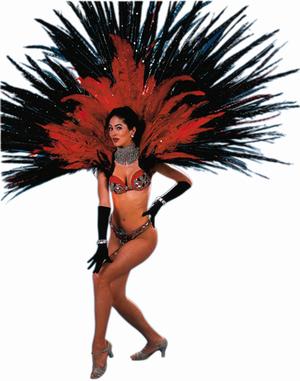 Perhaps the fact that Folies has been in Vegas since the time of the Rat Pack is what gives it that timeless feeling. Folies Bergere has been a staple at the Tropicana Hotel and Casino for nearly 50 years. The latest version of which chronicles American history as well as the history of the showgirl. Folies is a whirlwind through time and space with gorgeous women and the most pristine of costumes. The dance numbers and intertwined comedy personify the fad that swept the nation in the early 1900’s – Vaudeville.

While Vaudeville was becoming an American classic in the 1920’s and 30’s, the Folies had been running in France since 1869 and did not have its first nude showgirl until 1918. Folies Bergere gained its first exposure in the United States on Christmas Eve, 1959, at the Tropicana’s Fountain Theater. In 1975, the show moved into the new, better equipped, Tiffany Theater and has remained there ever since. Also, in 1975, the reigns of the Folies Bergere were handed over to Jerry Jackson, who is still the creative mind behind the show. Most notably, Jerry designed the 100th Anniversary show in Paris in 1966.

No other Vegas show opens with a topless rendition of ‘NSYNC’s “Dirty Pop”, but this is not just another Las Vegas show. True, the opening act does tastefully depict scantily clad women thrusting their agile bodies about the stage, but there is so much more offered. A gorgeous prima ballerina graces the stage and hypnotizes the crowd with her beauty and elegance; flowing costumes that, if one sits close enough, really show the girls are having fun; one priceless stage comedian that gives himself a medal every time he completes a trick injury free.

Like any show of its kind, Folies Bergere is not complete without its Can-Can. Every performer takes the stage in what becomes a routine unto itself. In fact, there is so much going on that one would have to view Folies 2-3 times just to catch it all. Unfortunately, like all good things, the show does come to an end. However, not before you’ve been cast through time and have been able to catch glimpses of what Vegas ? and France ? use to be. 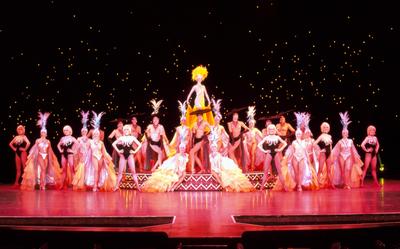 The Folies Bergere has captivated the minds and imaginations of the thousands in its wake. One can be fully immersed into the show. You will quickly find yourself lost in time – warped even – through the 90 minutes spectacle. The changing scenery, slap-stick humor, and flamboyant costumes will leave you searching for words. But, that will pale in comparison because all the while, you’re still trying to spot that lovely dame that danced off with your heart during Act One.