Only in Las Vegas might one find a gathering of politicians, celebrities, icons and even puppets together on one stage?in this case, all these personalities are voiced by a lone performer. Popular comedian and “MadTV” alum Frank Caliendo headlines at the Monte Carlo, presenting his much celebrated and beloved impressions of stars and celebs including John Madden, Dr. Phil, George W. Bush and Al Pacino. Boasting some of the Strip’s most comfortable accommodations, including legroom aplenty, the Lance Burton Theatre houses the impressionist’s show from Thursday through Saturday at 9:30 p.m., as well as Sunday and Monday at 7:30 p.m.

Entering the theatre, guests may purchase cocktails from a handsome bar just outside the showroom. Once the audience is settled in the grand theatre, a live band performs rock classics and campy TV theme songs, warming up the eager audience. The band also occasionally accompanies Caliendo during the show. Next, comedian George Cantor provides the opening act prior to Caliendo’s anticipated appearance.

Inaugurating the show with some political parodies, Caliendo flawlessly feigns Bill Clinton’s bawdy banter with a smooth southern drawl and playfully exaggerates Dubya’s comically confused malapropisms. The two presidents take to the mike as Caliendo croons “I’m Too Sexy” as Clinton and offers an even sillier rendition of “Rubber Ducky” as Bush. Attendees may even be treated to Caliendo’s in-the-works impressions, including a surprisingly accurate proto-Obama. 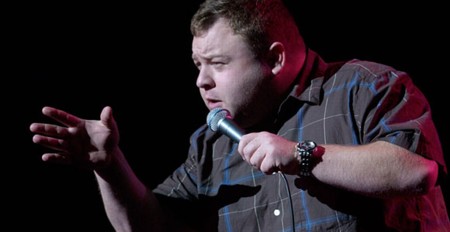 Some personalities need only be identified with a single sound or slogan, such as Caliendo’s caricature of Dick Cheney, rendered with a contemptible scowl and vulture-like shriek, or b-baller Barkley, who repetitively proclaims this and that to be “turr-ible”. Other impressions require a more physical approach, such as Caliendo’s conception of an intensely animated Al Pacino or his boisterous lampooning of Robin Williams.

At one point, Caliendo reclines on the stage, raises a bare hand to perform as a Kermit hand puppet (sans puppet) and, to his credit, never experiences a lull in laughter from the audience. Later, drawing upon a box of props a la Carrot Top, Caliendo integrates wigs and headpieces into his act, even donning a Snuggie to transform into Yoda or a particularly hilarious Dr. Phil.

Concluding the show, Caliendo enlists Cantor’s help in a quick-draw performance, rapidly shifting from one character to another in an impressive, high energy grand finale. Following the performance, attendees may meet Caliendo in the lobby for photos and autographs, as well as purchasing the entertainer’s merchandise.

Caliendo’s masterful delivery of topical, political and pop cultural humor as well as his spot-on satires of many of today’s personalities make for a side-splitting show not to be missed!