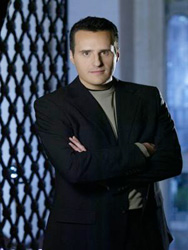 It’s plain good ol’ Las Vegas tradition to capture the awe of viewers with dynamic props, extravagant effects, unconventional talent, and unparalleled showmanship (though often an overkill). One man, however, opens doors to the hearts, emotions, and spirits of people using entertainment weapons that far surpass the need for a stage crew: His mind and the minds of those he encounters.

Gerry McCambridge, better known as “The Mentalist,” has the undeniable ability to get into the heads of any and everybody. So much so that his 20 year cerebral career journey has taken him from celebrity events to a major NBC television series to his own full blown show at The Stardust. This man knows what is going on in the head of any person at any given time, facts ranging from their specific idiosyncratic personal habits to the exact name of their very first crush…and he is so freakishly accurate. 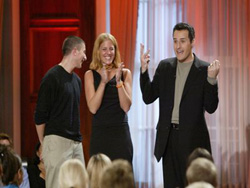 But Gerry himself is only a freak in how thoroughly and meticulously he refined his gift. Intuition alone wouldn’t cut it. He studied the mind to no end along with Psychology, Hypnosis, and Linguistics (just to name a few); watched how people communicate with one another; observed body language, eye movement, and tone of voice; he even worked in a psychiatric hospital and learned facts about how the brain worked. And lucky for Las Vegas, he’s sharing the whole psychological sha-bang.

“Make sure cell phones are turned…on.” On? Yes, if anyone’s phone rings during the show, Gerry will read the mind of the person on the other end. Amazing, yes, and a feat that leaves little room for conspiracy as anyone would love to somehow reveal that this guy is a fake. Gerry, as a matter of fact, holds up a check for $25,000 that goes to anyone who can prove any of his show material is conspired from anything else than his own special mind mastery.

Audience participation makes up the entire experience. People in the audience pick other audience members for his readings (again eliminating space for skepticism) and he proceeds with things such as their full name to if they’re married with children, how many children; even to mentioning the exact spot they may be planning to move. The reaction of the person at his mental mercy says it all. “Anything in your head I have access to. Be afraid, be very afraid.” 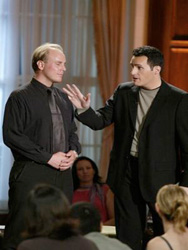 Blindfolded, very, very blindfolded, Gerry also demonstrates that he can tell what a material item is without touching it. Randomly, 3 purse items are picked from the audience and The Mentalist can tell exactly what they are, personal items as bizarre as guitar picks or travel bibles. His method for this is of a basic principal- the whole audience if focused on the item, feeding him the information he needs. Go ahead and try to be a skeptic now.

“Now, where there’s a door, passage through can go in more than one direction. This may explain how when random audience members were asked to pick a city (any in the world) or a color (more specifically any kind of weird color combination), Gerry already had their responses in a sealed envelope that remained on stage and untouched throughout the show in plain view. Yes, he was putting the responses he wanted in their heads. You were thinking Sydney, but for some reason said Denver? Well, that’s why.

And truthfully, this is only a small sample of Gerry McCambridge’s maddening display of what most want to deem impossible. Faith in his remarkable, highly tuned abilities lies in simply seeing him perform this earth-stopping trade. Could it just be categorized as plain magic? No, his only magic lies in making people believe in the unbelievable.