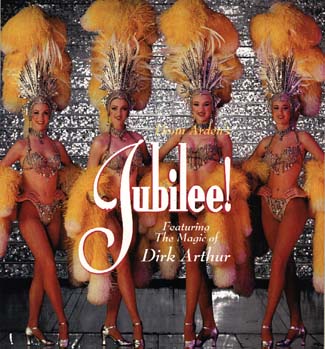 “Don Arden’s Jubilee!” at Bally’s has been a staple on the Las Vegas strip since 1981, and with good reason. This is very much a throwback to the television variety shows of 30 years ago, featuring an impressive array of song, dance, theatrics, magic, and specialty acts.

Act 1 features all of the almost 100 singers, dancers and showgirls in seven scenes that remind us of the golden age of Hollywood musicals (with the exception of the topless showgirls). This act continues to build into a crescendo of entertainment that covers the entire stage, and gives us a taste of what is to come.

Act 3 entitled “Samson and Delilah!” was a loose theatrical interpretation, featuring some of the very elaborate staging that this Jubilee! is famous for. The story of lust and deceit featured risqu? costumes on both the male and female singers and dancers, recreating the decadence of that period. As expected, Samsom brought down the set in a burst of fire and falling debris.

Act 2 and Act 4 were perhaps the weak points. Act 2 features the balancing artistry of Jean Nedel. This man’s upper body strength is phenomenal, as he balances with his hands and arms on dual and single poles with his entire body moving and twisting above him. But … once you’ve seen it, you’ve seen it, and this segment could be shortened. Act 4 was the first of two by feature magician Dirk Arthur, featuring standard illusions and a couple of his exotic leopards and tigers. A piece of close up magic was broadcast large-screen as he performed it so that everyone could see, but between the poor lighting and picture quality, most of us were straining to see what would have otherwise been a great trick in a more intimate setting.

Act 5 picked right back up again with the “Titanic.” With impressive staging and props, we are taken on a journey aboard the ill-fated voyage with a spellbinding tribute to the French follies shows of old. The replication of the ships grand ballroom provides fun and frolic that is interrupted by news that the Titanic has hit an iceberg. The stage is transformed into the engine room in a flood of water as havoc breaks loose and the ship sinks in grand form. This must be seen!

Act 6 brings back Dirk Arthur, and this time he gets the ball rolling with a number of incredible illusions. He escapes a rock cutting drill, makes a tiger vanish in thin air from a cage above the stage, makes a sports car levitate and vanish, and finishes by making a helicopter appear. He certainly was saving the best for last!

Act 7 is “The Finale,” a formal ballroom-based tribute to Fred Astaire and Ginger Rodgers with nods to Cole Porter, Jerome Kern, and Gershwin full of music, romance, impressive costumes, singing, and dancing.

Jubilee! is the full-scale variety show (minus comedy) that goes for an over-the-top feel in every category. You shouldn’t be disappointed.