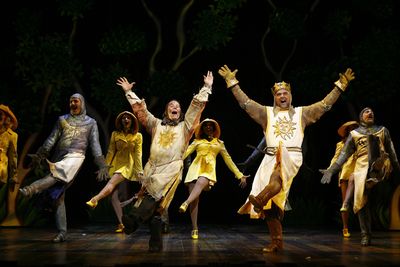 For those who consider themselves a Monty Python fan, there is a special breed of humor found within the absurdity of the British comedy troop. While the classic film “Monty Python and the Holy Grail” carried its fair share of catchy tunes, it would have never been considered a Broadway-scale musical… until now. “Spamalot” takes the troop’s second film and turns it into a full tour de farce that showcases a spectacle that is “lovingly ripped off from” the Python’s parody of the Arthurian Legend. 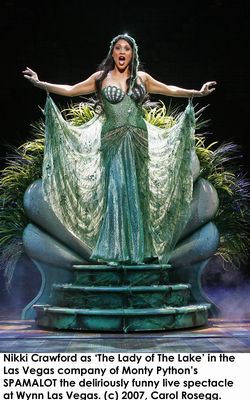 So is “Spamalot” simply an adaption of the film? Monty Python fans know that nothing is ever as it seems when it comes to comedy, and to always expect the unexpected. While “Spamalot” lifts primarily from the original film, it also serves up a buffet of classic Python songs from past “Flying Circus” skits, and includes them into the story in clever and seamless ways. The rest of the production adds new extended scenes into the story that fit well with the absurd sense of humor the film is known for.

Located in the Wynn’s “Grail Theater”, the experience leading up to the seating itself provides as fun a ride as the production itself . The hallways leading to the theater are filled with pictures of the Python alumni: Graham Chapman, John Cleese, Terry Gilliam, Eric Idle, Terry Jones and Michael Palin, and numerous jokes and silly sight gags. Even the concession experience continues to offer theater patrons a playfully naughty chuckle by serving their favorite alcoholic beverage in a plastic Holy Grail replica. The theater itself is lavishly done, with sets rapidly going from outer castle walls, to intentionally overblown theatrical spectacles worthy of Las Vegas. 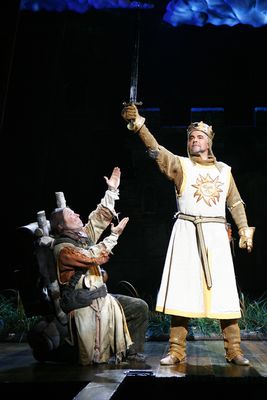 Leading the cast of “Spamalot” is John O’Hurley (of “Seinfeld” fame) as King Arthur. All of the “Holy Grail’s” s befuddled Knights of the Round Table are present to continue their awkward search for the lost relic, as well as some new characters, such as the show stealing, divaesque Lady of the Lake with her “huge tracts of land”, and her backup “Laker Girl” dancers. Never fear, Python fans: The taunting Frenchmen, the Black Knight and the Killer Rabbit are all here too. The ensemble cast provide a solid and hilarious performance, gleefully bouncing back and forth between the story, and breaking the fourth wall to remind the audience that they are watching a stage musical set in Las Vegas.

There is one final question to be answered: Will non-Monty Python fans be able to enjoy the show if they don’t know or get all the jokes? The humor is written to please the fans, but is broad enough to get some genuine laughs from those unfamiliar with Monty Python’s sense of humor. The music also has showcases a broad diversity with upbeat, hilarious songs to more traditional Broadway style tunes… with cleverly tongue in cheek lyrics. In addition to the show, there is also a behind the scenes tour that allows show goers to see how the production is made, as well as getting a chance to meet members of the cast, and have pictures taken with them on the set.

For those who want to have a enjoyable evening of music and comedy, “Spamalot” provides both in ample amounts. This is one production that Python fans, visitors, and locals alike will not want to “run away” from.