Secret Garden of Seigfried and Roy

I must confess that after 7 years of living here, I had never taken the time to view this exhibit. With my parents in town for Thanksgiving week, I figured it would be a great time to take them to see something new and relaxing. 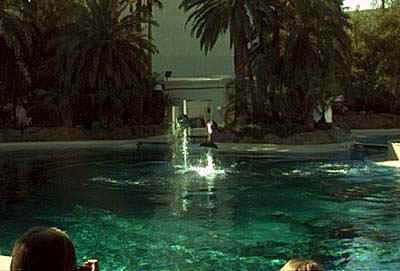 The Gardens are located at the far back of The Mirage next to the pool area. If you are unfamiliar with the property, just keep heading toward the back of the building (veering to the left) until you see the signs. The Gardens open at 11:00 AM, but we suggest not going during the first hour. Tour groups come through and we had a good 30 minute wait to get in, with the line wrapping along the beautifully landscaped walkway leading up to the Garden.

For the first part of the visit, you are among a group of about 30 people and a guide brings you into the dolphin area, where you can watch the 7 bottlenose dolphins frolic, play, and work with their keepers. This is not a “Sea World” style show, although you will want to keep the camera close as you may get lucky enough to see the trainers putting them through their paces, having them do tandem flips and the like. The viewing area is tiered so that everyone gets a good view as the guide gives a short talk about the dolphin habitat. 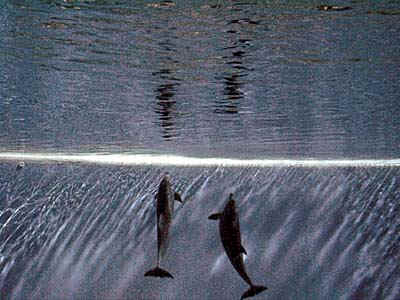 From there, you descend underground into a long, comfortable area where multiple large windows let you see these magnificent creatures eye-to-eye. This is a great photo-op, and if you have a camcorder you’ll get some fantastic footage. (If you are in town with a rental car but no camcorder, Precision Video at rents video cameras). If you don’t get the shots you want because too many people are crowding the windows, just wait and come back later.

After the guided tour portion is over, you are free to roam the entire grounds at your leisure including the areas already toured. The best thing to do is to wait until after you have visited the tiger habitat, and then go back and descend underground just as a new tour group is emerging. You will have the area to yourself for a good 5 minutes to photograph or just gawk!

While you are down underground, the guide tells you more specifics about the dolphins, where they get them (none are from the wild), how much they weigh, and actually shows a spectacular video of a mother dolphin giving birth to a calf. Interestingly enough, that calf dolphin is now almost full grown and one of the many you see swimming around. Note: If you are claustrophobic, no real need to fear this underground area. All the windows into the huge pools make it very comfortable.

The pools contain 2.5 million gallons of water, and it took 280 tons of salt to create the “natural” salt water. Two artificial coral reefs and a sandy bottom create a naturalistic environment, and the water quality and temperature are vigorously maintained. A separate “technical” tour is available at the top of each hour for those who want a more information or a closer look at that side of the operation. That tour is included in the price of admission and is optional. 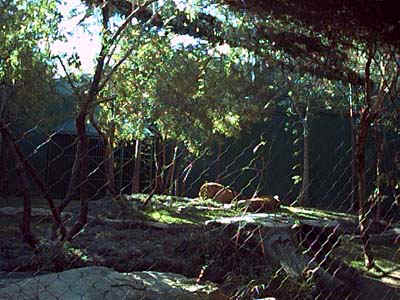 After a few more words from the guide, you are pointed at the tiger habitat and you are on your own. They disperse complimentary wands which allow you to punch in a number corresponding to the tiger area you are in front of and hear detailed descriptions about that particular animal.

The tiger habitat is lush and green, and divided up into sections housing the various species. You can stroll from section to section at your leisure. The tigers are well fenced in, but the layout lets you get plenty close! Because of the chill the day we were there, the animals weren’t very active but the photo opportunities were second to none. Name plates identify each tiger in an area, and listening to the background and history of not just that species but that particular animal on the wand (it works similar to a cell phone — you put it up to your ear) brought particular appreciation. Also housed in the area is Gildah, a Ceremonial Thai Elephant. However, my guess is that the only ceremony this one is involved in is when it disappears twice nightly in the shows! 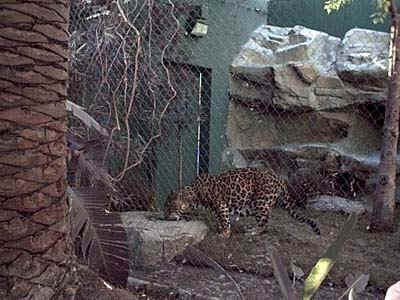 Winter hours for the Secret Garden of Seigfried & Roy are 11:00 AM to 3:30 PM. Summer hours are longer, so don’t hesitate to call ahead at 693-7111. The admission is a very reasonable and worthwhile $10, which goes to maintaining the habitat and other animal preservation activities. If you enjoy animals, are looking for something for the kids to do, or just need to spend an hour away from the tables to halt a streak of bad luck, this exhibit is well worth your time.