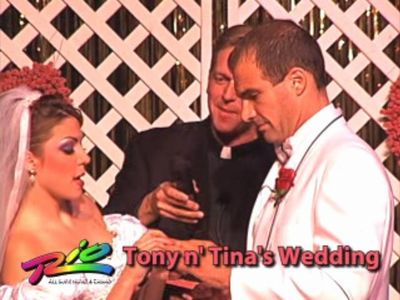 “Tony ‘n Tina’s Wedding” at the Calypso Room at the Rio Hotel & Casino is a must-see! It pulls you in immediately. Literally the actors, in character, pull you in the minute you walk through the door. You will be ushered to your table and then greeted by your emcee for the evening, the obnoxious, loud Vinnie Black and his tacky wife Loretta. Vinnie is like a shock to the system, but in a good way, pulling you right into the fun. “Tony ‘n Tina’s Wedding” is the story of two crazy Italian families, the Vitale’s and the Nunzio’s, coming together for an evening of mayhem and shenanigans. Don’t think you’ll be just sitting back and watching the show. This is an interactive experience and you will be a part of it.

Before the wedding ceremony even begins, the macho groomsmen with attitude will make you feel like you’re part of the family, but not just any family. Everyone, including the bride and groom-to-be, make their rounds greeting the guests. That would be you and me folks, so get prepared to experience two hours of zany fun. Family “issues” delay the start of the wedding while Sister Albert Maria is appalled by the certain behavior of the sleazy Italian men. With the help of Father Mark, the mild-mannered priest, they try to get this motley crew under control and get through the wedding ceremony. 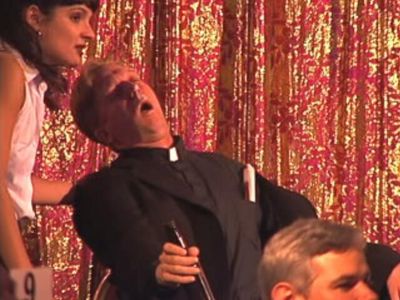 The priest and the nun are able to calm everyone down and get through the ceremony, but not for long. Now that Tony and Tina are married, there’s a lot of celebrating to do. The cast makes sure that everyone gets up on the dance floor to do the chicken dance, the limbo and plenty of dancing with the bridesmaids and groomsmen. The wedding band, playing hits of the ’70’s and ’80’s, is terrific. The Mother of the groom belting out a tune is a show-stopper as well as one of the two sassy bridesmaids who gets up to sings with the band. 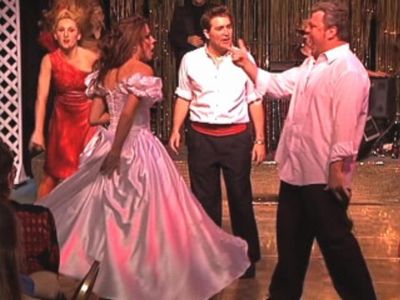 The rest of the talented and very entertaining supporting cast includes the second very pregnant bridesmaid who is doing things she shouldn’t be doing, the displaced brother of the groom fresh out of rehab, the brother of the bride who tries to keep it all together despite all the fights, and the devout priest – who by the end of the night can’t take it anymore. Last but not least are the charming and deliciously stereotypical groomsmen.

Tony’s father, Tony Nunzio Sr., a hilarious rough & tumble Italiano with more rings than fingers who swigs from his bottle of booze in a paper bag. He’s not the only one who keeps the ceremony from getting started. Tony Sr.’s trashy girlfriend, Madeline Monroe, replete in fishnet stockings wearing a too-short tight gold dress can’t distract the men in the wedding party enough with her naughtiness.

This is a show for adult audiences as there are sexual innuendos and lewd comments, which are all part of the fun. Make sure to make “Tony ‘n Tina’s Wedding” part of your Las Vegas Vacation. At the end of the night, you won’t want to leave!

Le Reve: A Surreal Journey Above and Below A Dream
American Superstars Show Tickets and Reviews
Peepshow - The Transformation From Nice To Naughty